What We See at the Sports Clinic: Most Common Sports Injuries

Training is important; so is recognizing sports injuries

Athletes are tough cookies. Even supposedly gentle and graceful sports such as swimming or ballet require a commitment and endurance that test a person’s mettle. So it’s natural that these same people will sometimes try to shrug off a sports injury — until it sidelines them. Then they appear in our clinic and the first question is: Doctor, how soon can I get back to the game?

Our mission as sports medicine specialists is threefold: Diagnose the injury or condition; design a treatment plan; persuade the athlete that Mother Nature has a hand in determining their rehab schedule.

According to information collected by the American Association of Orthopaedic Surgeons, these are among the top sites of sports injuries:

The most common types of injury are sprains and strains. A sprain refers to a ligament that’s been stretched too far. A strain is a muscle pull. You can see how these types of injuries relate to certain body parts: sprained ankle; pulled groin; pulled hamstring; sprained knee (ligament).

The keys to preventing these injuries are training and conditioning. Unfortunately, training often consists of more of the same game. So a basketball player trains by practicing . . . basketball, what else? A swimmer . . . swims. A good coach understands that conditioning and cross-training can help protect his or her players from injury.

Participants in running sports such as soccer and basketball need to listen to their bodies, especially if they’ve been injured in the past. Some ankle sprains are acute. They happen suddenly when a player lands awkwardly or is jostled on the court. But others are chronic and are weeks or months in the making.

When we ask our hobbling visitor to the clinic, When did you first notice this? he or she answers sheepishly that it’s been bothering them for some time— but not that much, Doc. Not that much.

A groin pull, which is a strained muscle in the hip or upper thigh, is common in soccer, football and hockey. Players tell us they started feeling some tenderness in the area after a certain game, but they didn’t want to tell the coach. Eventually, this stoic attitude catches up with them.

The groin muscle needs to rest. Anti-inflammatory medications may help relieve discomfort. We may wrap the leg. Eventually, stretching and strengthening exercises may help but again, you can’t rush Mother Nature.

Conservative Treatments May Be Effective 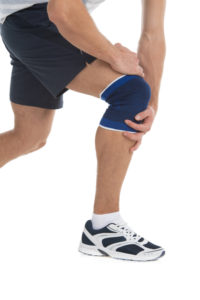 A hamstring muscle pull is similar to a groin pull in that it’s a muscle that needs strengthening. There’s an old saying that someone who is in a very difficult situation is hamstrung (the term comes from the fact that a person whose hamstring has been cut is crippled and can’t walk). This is apt, because a hamstring pull can be agonizingly slow to heal due to the fact that it’s used for walking and getting around.

A hamstring injury is caused by overloading the muscle. Tight hamstrings, muscle imbalance (when one group of muscles such as the quads is stronger than the hamstrings), poor conditioning and fatigue are leading causes of hamstring injuries. While the condition often responds to conservate treatment (rest, wrapping, crutches), in some cases surgery may be advisable.

Surgery Is the Best Option For Some Knees

While the above ailments are muscular, a knee injury is very often due to a torn ligament. In this case, conservative therapy may not be the best option. Sports medicine physicians see a fairly high number of anterior cruciate ligament (ACL) cases that require surgical repair. Knee surgery has come a long way in the past few decades, and it’s no longer a career ender.