One of our patients, a wiry triathloner named Bob, has been training for the Kona, Hawaii, Iron-man, clocking 60 miles per day on his bicycle, as well as running and swimming. 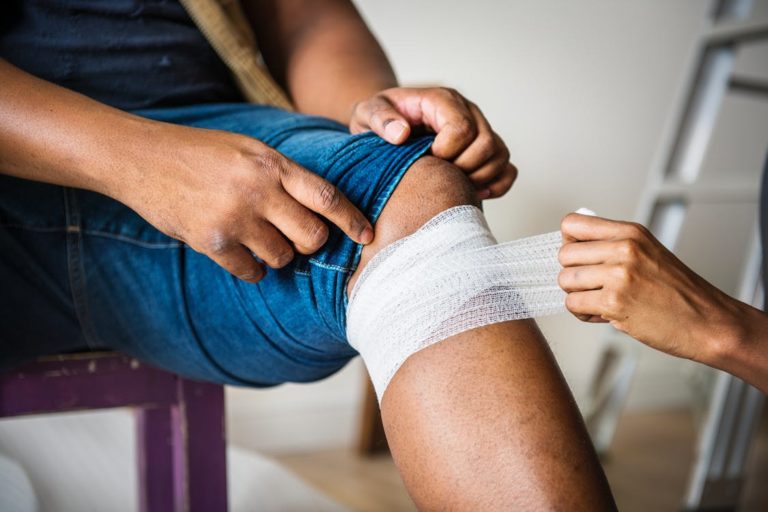 Lately, he’s noticed a growing soreness in his left knee. In all of his 45 years, he said he’s never felt this kind of pain.

“I press down on the pedal, and I’m frozen”, he said. “What the heck is going on, Doc? Do you think I’m over-training? It’s not like I’m doing anything different than I was last year!”.

Bob is a hard-charging software entrepreneur, but this injury threatened his very soul. It’s a scenario we often see. Those joints that have carried us without complaint suddenly become the very locus of pain and pressure.

From Joint To Point Of Pain

The thing about knees is how suddenly they can seem vulnerable. One day you’re bouncing the basketball, running easily down the track or sprinting for a drop shot . . . and the next day it looks like there’s a baseball buried in the kneecap.

It’s complicated, as they say. There are bones, the femur, tibia, and patella, that form the joint. Articulating parts are covered with cartilage. The tibia carries two shock-absorbers, the lateral and medial menisci (cartilage), and ligaments secure the joint. The inside of the joint is covered by the synovial membrane, and the outside is protected by a fibrous capsule. Tendons on the front and side support the joint. Muscles of the thigh are attached to the tibia. Various nerves and blood vessels nourish the area. Bursa, small sacs of fluid, protect the joint.

Just reading this makes you wonder how anyone can have a normal, healthy knee.

But the truth is, knees are built to withstand a lot of stress. As the largest joint in the body, the knee is critical—not just for athletics, but for everyday motion.

Fortunately, it’s also an area where orthopedic medicine has made great strides since the first knee replacement in 1968.

Knee Surgery Is One Option

Before we can discuss treatment for an aching knee, we need to diagnose the cause. The most common sources of knee pain are:

When you come to the clinic, we’ll first perform an exam and possibly order some imaging tests.

We’ll also ask about your history and your lifestyle.

Some knee injuries respond to conservative treatment—anti-inflammatory meds, icing the injured area, and refraining from activities that cause pain.

In other cases, we may need to perform arthroscopic knee surgery. If the injury has progressed past the point where the joint can be rehabilitated, a knee replacement is an option. Almost 5 million Americans are now living with an artificial knee; it’s become one of the top surgical procedures in the country.

By now, you’re probably wondering about Bob. Did he compete in the Iron-man? What was the diagnosis? Did Bob retire from the active life he loves?

Well, never fear. Bob’s knee was fundamentally fine. He had a strained collateral ligament causing knee pain from running the week earlier when he remembers his foot landing awkwardly in a gopher hole. We told him to take a few weeks off from biking and running and concentrate on his swimming. At that point, the triathlon was still eight months away. Last we knew, he was in fighting trim and had booked a flight to Hawaii. He offered to buy us a ticket, but we said we’d watch for him on ESPN.